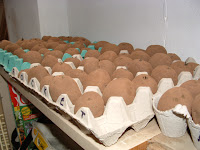 Welcome back to Reads allotment retreat, for a long overdue update on what we're up to.
As you can see from the photo, the main activity in hand is watching the pots chitting in the greenhouse. Regular readers will know that this year we are growing Rocket, Nadine, and Cara. Because we can. Originally I intended to grow Maris Peer as a second early, but my allotment society had trouble getting them from their usual supplier. With that in mind, I couldn't resist picking up a pack of these from Homebase during a recent shopping spree. Although I was more than happy with Nadine as a replacement, i still had a hankering for my original choice.
All i need to do now - over the next 6 weeks - is to get the ground readied for planting. (All volunteers welcome - bring a spade and fork!) I also need to source some more of my trusty black fabric mulch through which to plant. To me, it's the best way of avoiding green tubers. Traditionalists reading this will be cringing - they've been earthing up their tubers for years. Yes, I know that works, but this to me is far easier, and it works a treat!

Seeds still need sorting, and there's loads of other jobs too.

Take care all - enjoy your gardening. I look forward to seeing you again soon.

All bought and paid for! 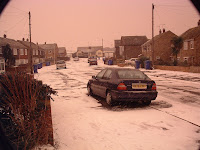 Welcome to a cold and wintery 1st of Feb update from Reads Allotment Retreat. Despite the weather encroaching upon us, I popped up to the allotment today and paid my firtst years rent. £29.60 seems a small price to pay, considering i now have access to over 300 sq yards of land to grow my own veg. I say over, as the society have allowed me to take on the land at the end of my 10 rods - Free of Charge, which gives me approx 100 sq yards extra! There still is a hell of a lot to do to get ready for planting, but regular readers will know I am making good progress. There's still about a day's work to go to ready the beds for the spuds, but I have amazed myself at how much I have managed to do already!
Today I picked up the spuds that I ordered back in October. There was a small surprise: The second earlies that i ordered (v.Maris Peer) are not available, and I have been given 6kg of Nadine as a replacement. This would have been my second choice, so I am none too worried. What did surprise me though, was how small the tubers were in the First Earlies parcel (v.Rocket). In a 3kg pack there were 66 tubers ! Far more than I expected. As soon as I got home, these were transferred to old egg boxes, and placed in a light/cool/frost free place ready to start chitting. I need to get more egg boxes from somewhere, as I have over 100 more spuds to chit. Transport cafe here i come!

I popped up to the plot earlier in the week with my Bruv in law, as he had volunteered to help with the digging. (Thanks Neil). While we were there, I also planted a Rosemary bush, that I had bought locally. It cost a mere £2.50 for an established plant grown in a 6" pot. I had previously tried to take some cuttings at home, but these all seem to have failed.

That's about all for now, but join us again soon for more news from the plot.
Posted by Gary and Jen, and Ruby and Peter at 22:27 2 comments: