Couldn't resist sharing this ditty - my mate mossy has it as his facebook status:

Goodbye to my England, so long my old friend
Your days are numbered, being brought to an end
To be Scottish, Irish or Welsh that's fine
But don't say you're English, that's way out of line.
The French and the Germans may call themselves such
So may Norwegians, the Swedes and the Dutch
You can say you are Russian or maybe a ...Dane
But don't say you're English ever again.

At Broadcasting House the word is taboo
In Brussels it's scrapped, in Parliament too
Even schools are affected, staff do as they're told
They must not teach children about England of old.
Writers like Shakespeare, Milton and Shaw
The pupils don't learn about them anymore
How about Agincourt, Hastings , Arnhem or Mons ?
When England lost hosts of her very brave sons.
We are not Europeans, how can we be?
Europe is miles away, over the sea
We're the English from England, let's all be proud
Stand up and be counted............shout it out loud!
Let's tell our Government and Brussels too
We're proud of our heritage and the Red, White and Blue
Fly the flag of Saint George or the Union Jack
Let the world know....WE WANT OUR ENGLAND BACK !!!

Sadly, it's so very true. 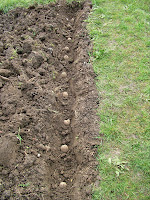 Welcome back to our Allotment Retreat. Today, with a tiny bit of help from my friend, I managed to plant the first row of spuds. The First Earlies,(v.Maris Bard) are amongst the first spuds to go in on the site. The first in though were third week of feb by Steve - good luck with those!. I figured it was about time to get planting. All told, we have a total of 120 odd tubers to go in, so we'll try and do a row every couple of days. The ground (recently dug over by Neil) is not too wet and I think we'll get away with it. Time will tell! (There were plenty of raised eyebrows from those "that know" as we set about planting! I even got "told" i was throwing money away. We'll see). 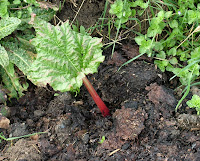 The Rhubarb is seemingly flourishing, with the first stem a good 8" tall , and the second stem just appearing. There's loads more weeds too, but they're on the list. The list - boy is it growing!! 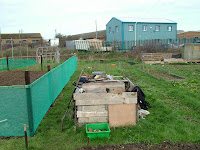 My plot neighbour (whom I've yet to meet), has decided to erect a scaffold net wall around his plot, which saves me a packet as I wont need a windbreak now. All i need now is all the other neighboring plots to do the same, and I'll be quids in. I know it looks neat and tidy, but is it really necessary ? Some people just seem to throw money at the allotment - goes against the grain with me! 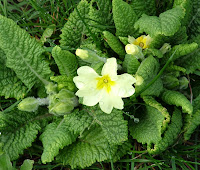 The Primulas that we transplanted from Bill's garden in Strood last year, are finally coming into their own. Lets hope they do really well and keep the Bee's coming back to the plot. More flowers is the order of the day. What shall we add next ?


Finally, or should I say at last? The seed planting is underway at home. Ruby got the ball rolling this year after Grandad bought her a Tomato starter kit. These are doing ok on the kitchen windowsill, So we decided to get cracking. Regular blog readers will know we have accumulated an abundance of seed, and we're gonna try hard not to buy too much more this year!
Today's sowings include: Sweetcorn(v. Swift Early), Courgette (v.All Green Bush), Tomato's (v.Garden Pearl) - for the hanging baskets at Reads Retreat, and some Sprouts (v.Red Delicious).

That's enough to get us going. The enthusiasm is overflowing now, so watch this space for more news from the plots.

I stopped smoking on Tuesday this week.

Now I just have to stop the weed from coming back! 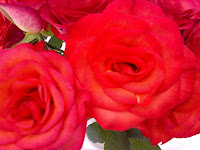 Welcome back to Reads Allotment Retreat, where I start this post with a shot of the lovely Roses I gave my darling wife today. Aren't they beautiful, just like Jen - love her to bits xx.
Further, can I extend a Happy Mothers day to all of you mums out there ( mine included!) - where would we be without you all.
Right after breakfast this morning I nipped to the plot to harvest yet more tasty leeks, which accompanied our Roast Pork dinner today - yum! 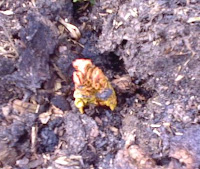 Whilst at the plot I took great delight in spotting that our Rhubarb crown is bursting forth from the manure mound that was unceremoniously dumped on it before Christmas. Rhubarb - as you know - is a hungry feeder, so hopefully this "rough treatment" will see us bag a bountiful harvest this year?

Thats all today folks, but really itching now to get cracking at the plot. Just need to get my health back.


Wherever you all are, I hope you are ready for the season ahead, and I wish you all a successful year.

Pop back soon for more updates from the plot. 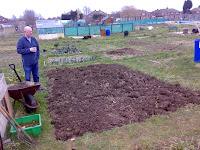 Well - what a grand job.
Neil really got his teeth into the task at hand, and we now have enough room to plant the first earlies! All I had to do was make the coffee! At least now we can get cracking!
Cheers ! 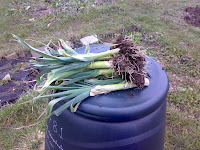 Whilst at the plot, we couldn't resist harvesting a half dozen or so Leeks, some of which went into tonight's stir fry, while the rest will go into a leek tart for tea tomorrow!
We're excited now about the season ahead, and not so daunted by the mammoth tasks.
We hope you'll pop back soon for more updates from our Allotment Retreat.

Till then, take care all and enjoy your gardening.

What a gloomy day!

Skies are overcast, and there's a slight chill in the air.

But, todays the day when the help arrives. My brother in law is coming over today to help with the digging on the plot. 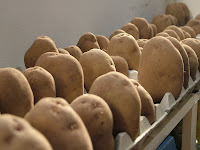 Welcome back to Reads Allotment Retreat. Finally we have got our seed potato's and have set about getting them chitting. This year we have decided not to grow Maincrop varieties as; despite their excellent taste, they take up a lot of ground for a long time. Also, they are readily available locally for £3.50 per 25kg sack! So, our choices ? Well, our First Earlies are Maris Bard(pictured). Although we have started the chitting process a bit late, it looks as though the planting date may also be later than usual too. The recent heavy rains have left large parts of the allotment waterlogged and unworkable. Couple that to the fact that I'm off sick from work still with my neck problem, and the planting of these seems far away! Once again we purchased these tubers through the allotment society, which proves again a great cost saving i.e. We paid £4.90 for 6kg of tubers - which is 55 tubers to be exact. Some of these are quite large and will be halved to make them go a bit further. Our choice of Second Earlies is Nadine. We grew these last year and were really impressed by the yield and their taste. These too were £4.90 for 6kg, and we'll get these chitting soon too. This represents a considerable saving over hgh street costs where, typically, 5 tubers are about a quid! The other main learning from last year is that we will not plant all at the same time, rather we'll stagger the planting for a continued crop.

Thanks must also be extended to my brother in law - Neil - who has kindly volunteered to help with the final bit of ground preparation prior to planting. I would not have been able to do this myself and am very grateful.

That's all for now, but pop back soon for more updates, our enthusiasm is growing fast for another good years growing ahead.

Take care all and enjoys your plots and gardens,