There is no more !

Welcome back to Reads Allotment Retreat.
Please forgive extended absence, but at the same time please hold on to your excitement:
After an awful year - ill health mainly - I have had to give up my allotments, as I could not maintain them sufficiently to keep both the Allotment Society and my neighbouring plotholders happy.
I leave behind 2 well tended half plots, and a further half plot I never really broke the back of. Somebody will inherit some nice apple trees, Rhubarb crowns, Red & Black Currant bushes, as well as approx 25 x 80 Litres of compost dug in to the main plots, as well as some spent hops donated by a friend.
I'm sad to see them go, but from sadness here to new life at Reads Retreat.
We dabbled this year on our home plots, but with Peter at the "Discovery" age of 1 1/4 to 1 1/2, nothing grew to fruition, as he really enjoyed pulling up plants and picking green toms.
Next year we'll concentrate our efforts on the home plot as well as welcoming some new additions to go in the chicken coop i bought Jen for christmas this year.
I'll leave this blog live for the foreseeable future; as I oft' refer to it my self, as I'm sure some of you do.
This however, will be my final posting here. Thank you to all my readers and followers over the last 5 years. I've enjoyed the blog, and hope you did too.
Catch us soon at Reads Retreat.
TTFN
Posted by Gary and Jen, and Ruby and Peter at 14:52 1 comment:

Jen has created a craft page, advertising her creations that she sells on ebay.
Click here for details
Posted by Gary and Jen, and Ruby and Peter at 11:15 1 comment:

Popped up to the plot today, and whilst there harvested half a dozen Leeks. Should be tasty in a Chicken & Leek Pie tomorrow night!!
Good to see also that the Runner Bean seeds have germinated, lets hope they survive the frost that is forecast tonight.
First Early spuds are growing well.
Pop back soon for more from the plot!
TTFN
Posted by Gary and Jen, and Ruby and Peter at 21:56 5 comments: 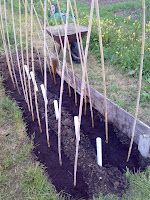 Welcome back to our Allotment Retreat, where we are please to inform you that we're fighting back. The weeds have run riot over the plot during my ongoing illness, but thanks to a little help, we are getting to grips with the jobs. Thanks must go to all who have helped out, most notably Neil & Stuart. It took a good ten days from start to finish to get the bed ready, but will hopefully be worth it in the end! So , how did we get here, and what did we do ? Read on! 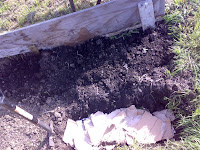 Having first cleared the bed of weeds, and digging the soil over several times (removing amongst other things 8 x 1' sections of cast iron gutter, and copious quantities of glass) , we set about digging 2 trenches, each about 8' long and 1' wide, and about 18" deep. We then lined the base of each trench with about 6" of corrugated cardboard which had been torn into small pieces. This will soak up and store the moisture for the roots of the climbing beans. We then backfilled to give a good depth of soil in which the plants can grow. 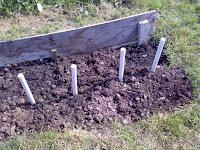 Next off, we pushed 6 x 3' lengths of plastic tube deep into the soil. We will use this to get water direct to the cardboard reservoir area in the base of each trench, simply by watering direct into the tubes. We're hoping that this "reservoir" of water will get the roots going to provide strong plants. 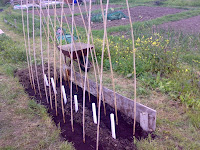 And then we put the canes in! I prefer to put the canes in vertically and then bend them slightly to meet at the top. This seems to give extra strength to the structure - needed because our site is wide open to the elements. Finally we added a good layer of gen purpose compost to each trench top, to use as our planting medium. With 10 canes vertically on each side, we had plenty of space to get planting. We put Runner Beans (v. Scarlet Emperor) all down 1 side, with 2 seeds about an inch deep for each cane. On the other side, we have a bit of a mixture: 2 canes have Borlotti bean seeds, 4 canes have Climbing Purple French beans(v. a cosse violet), and 4 canes have Climbing French Beans (v.Blue Lake). This will hopefully crop the approx amount of each variant that we want.

We'll also start plants off at home, to fill any natural gaps.

Adjacent to the end of this bed, work is underway to clear enough space to put a wigwam of Vermont Cranberry Beans that were donated via Dan - cheers! 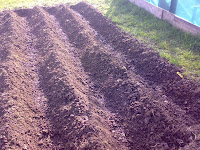 As i detailed on the 17th April, we decided to donate our greenhouse to someone who would get more use out of it. The lucky recipient of the "jigsaw" was Ralph, who in exchange was only too happy to rotovate our 3rd plot. Seems like a good exchange to me and we did the deal. Already Ralph has done half the plot, which made it very easy to plant our last 3 rows of spuds. These are our second earlies (v. Nadine) and hopefully they'll have enough time in the ground to give us a good, albeit slightly late, crop of tasty spuds.

So as you can see, many hands do make light work. Its still daunting looking around the plot - weeds everywhere, but a little and often is once again reaping rewards. The first early spuds are starting to show, the apple tree blossom is opening up, and there's a buzz of excitement around the site as summer approaches. Let's hope we all manage a good cropping year. I hope you've enjoyed our update, and hope you'll pop back soon for more from the plot.

To all readers - especially the English ones - hope you have a fantastic day.
RIP Dan Holkham (3rd Battalion - The Rifles).
TTFN.
Posted by Gary and Jen, and Ruby and Peter at 06:12 3 comments: 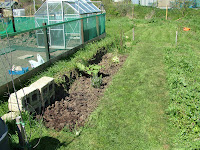 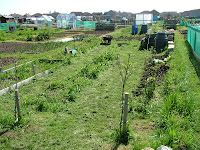 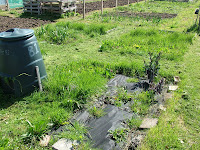 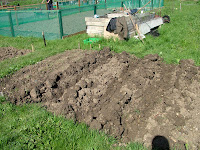 Welcome back to Reads Allotment Retreat, where we are able to bring more news, some good and some not so good! So, starting with the best bit: Thanks to some kind help from Jo & Co., we now have another 4 rows of spuds in the ground. This accounts for the balance of the first earlies, and half of the second earlies. The ground is still heavy, and drainage struggling, but he spuds have a fairer chance in the ground than out ! On a slightly down note, the rest of the plots are badly overgrown. This is due to my absence with ill health, and at present am concerned at how we're gonna gain the upper hand, and maybe a phone call will be needed to rally some help. I'm sure that a good mow of the grass will tidy things up considerably, but this too will also expose more weeds! Talking of weeds, I haven't touched one since 16th March - patting myself on the back as i type!
Seed germination continues at a pace at home, and I'll update on where we are with that later.
The weather looks glorious again, so i suggest you get out there sharpish!

Take care all and have a grand day.

April already, and we've been busy! 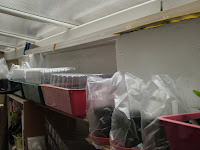 Welcome back to our Allotment Retreat blog, where despite the lack of any physical activity on the plot, we are pleased to let you know that our seed raising exploits are in full swing! The conservatory is starting to resemble a nursery, with every available flat surface now being given up for seed germination. It's all very exciting, we are growing some old favourites as well as a few first time attempts - as always injecting some new challenges as we go along. The list so far is as follows : 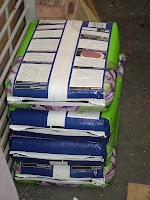 We've also made the first investment of the season in some general purpose compost. I don't like spending too much (must take after my father) and this is the best deal I have found so far: 4 x 70Litre bags for £12.00, from Asda! We'll no doubt be buying more as the season progresses, and If i find a better deal - I will let you know.
Thats about it for now, but we'll keep you posted on germination rates etc. We cant wait to get back to the plot. So much to do, so little time!

Take care all and enjoy your gardening. Pop back soon for more updates.